Use Network Speed Tester suite for macOS, iOS, tvOS, and Android to measure the actual transfer speed of your WiFi or wired network. A graph helps you see changes in realtime. Optimize your WiFi network by moving or placing your WiFi router until you reach the best results.

To make a proper measurement, you need to have at least 2 devices running in your local network. One device will act as a server, the other device as the client for visualizing the results. You can also test a local NAS or server filesystem.

Network Speed Tester is available in English, German, and Russian language for macOS 10.13+, iOS 13+, and tvOS 13+ (for iPhone/iPad/iPod touch and Apple TV 4) and for Android 5.0+ phones and tablets.

Quick Start: Open the applications on two devices on your local network. One will be the server (it doesn’t matter which one), the other one will be the client displaying the results. The name of the respective device will show up in the list. On the client, select the server from the list and press start to measure.

Mac only: you can also test against the “default router”. Though, this will be inaccurate, escpecially for fast wired connections. See also below in the FAQ section.

To get the most exact results while performing a test, make sure that:

Please note, that tests on the Mac automatically stop after 5 minutes to prevent prolongued strain on your network.

On macOS 10.15 and higher, you can also select a folder of a NAS / fileserver and test the speed by copying data to the server. If you want to test a fast network, make sure the NAS server is fast enough. For most WiFi tests, any NAS server should suffice.

You can also use both client and server apps on the Apple TV. The easiest way to install the apps on your Apple TV is to go to the Store app and switch to “Purchased” tab. Network Speed Tester apps will show up here, as long as you’ve downloaded them before on an iPad/iPhone. Note that if you’ve connected the Apple TV via cable, you will not get more than 100 MBit/s, as the built-in network port doesn’t support GBit Ethernet. (Doesn’t apply to the Apple TV 4K which does support GBit Ethernet.) 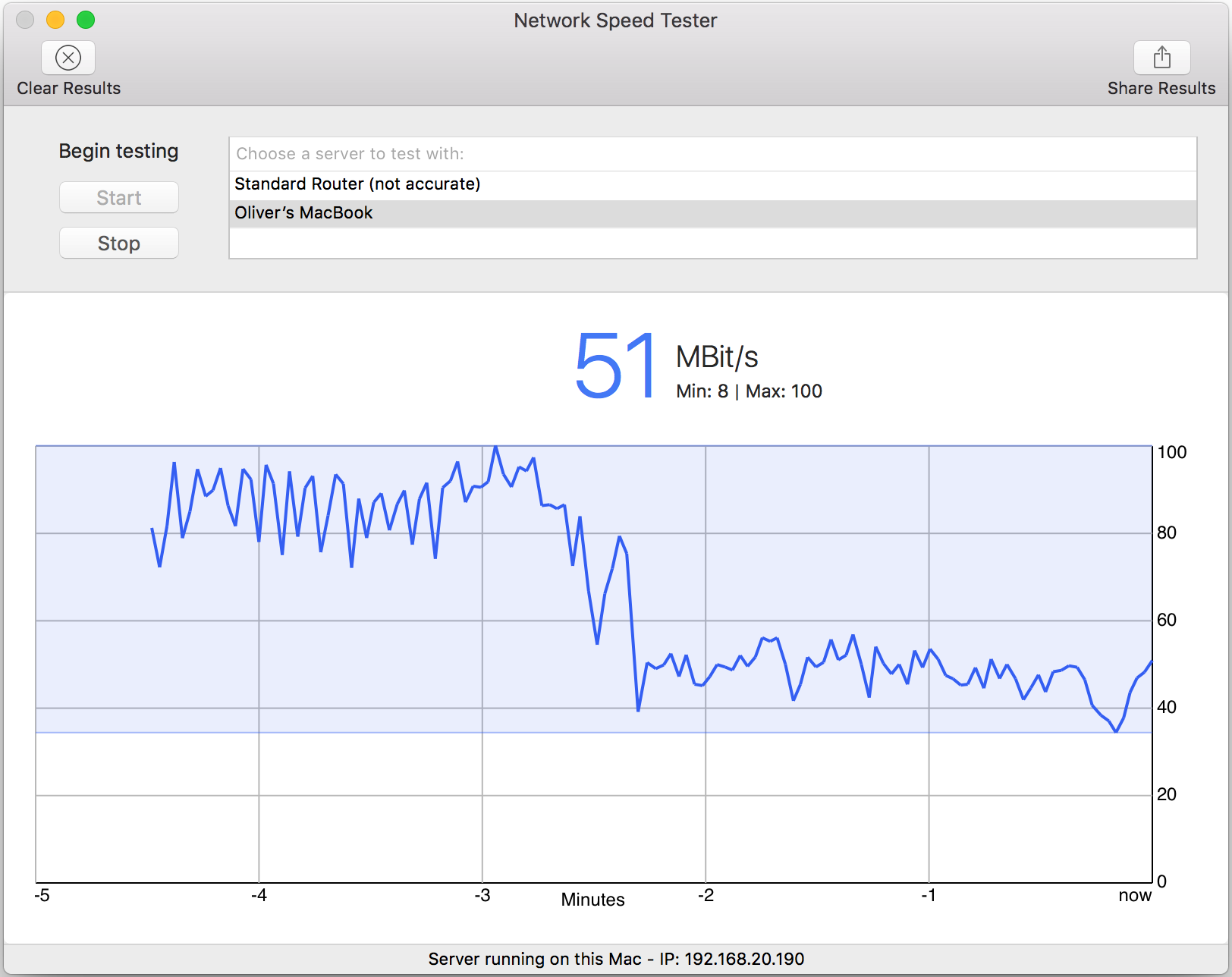 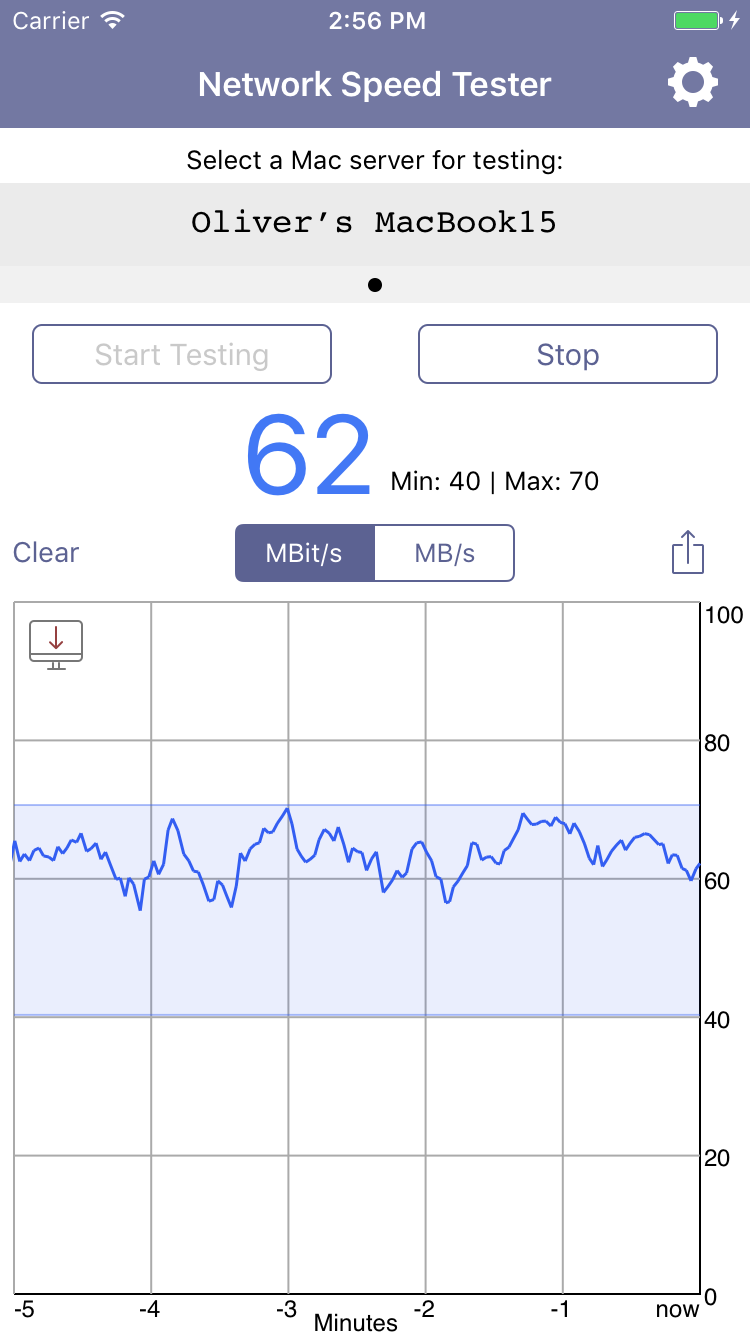 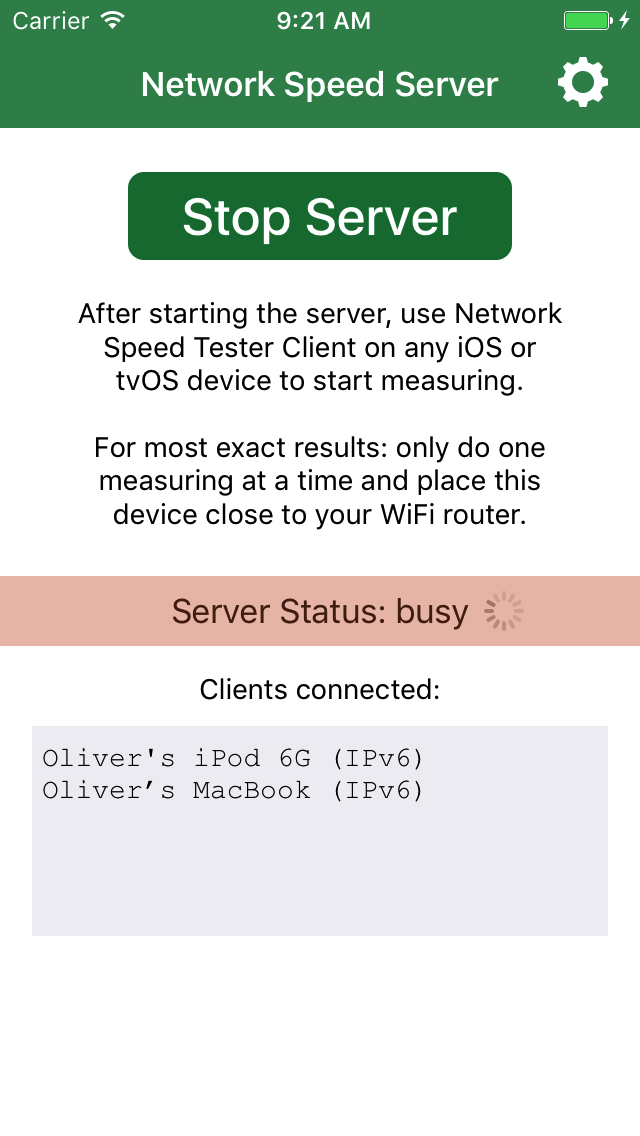 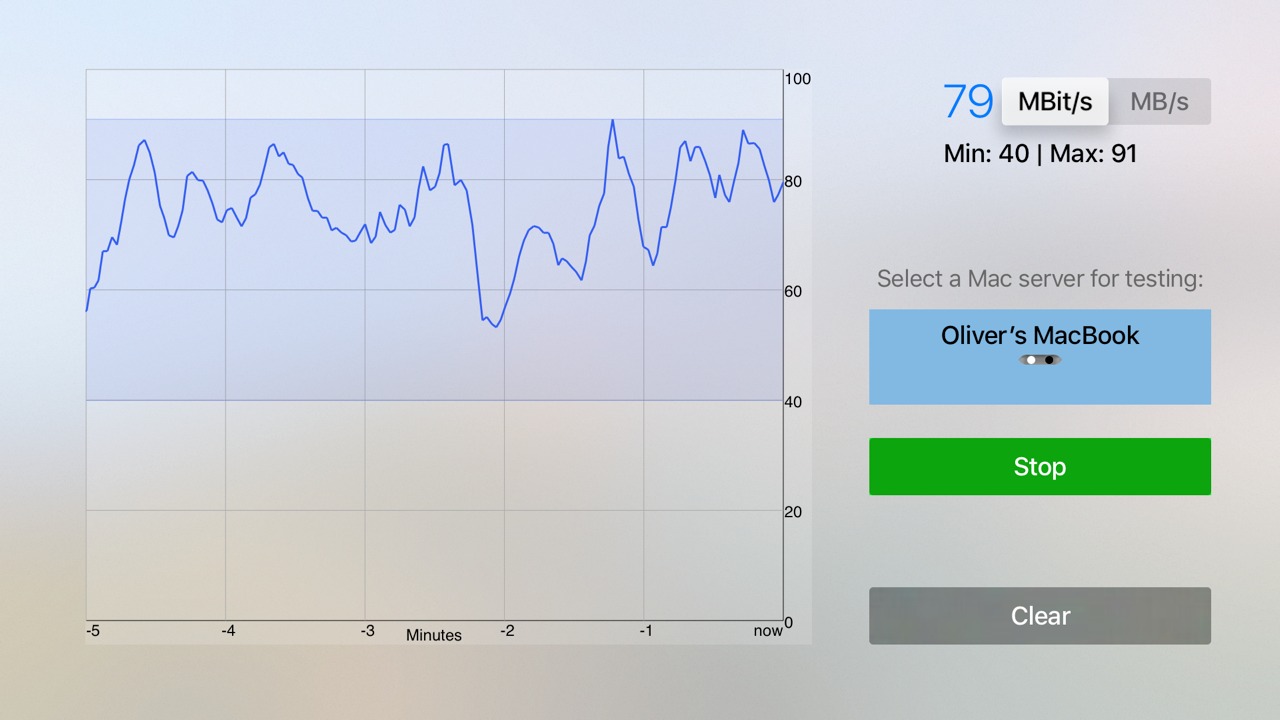 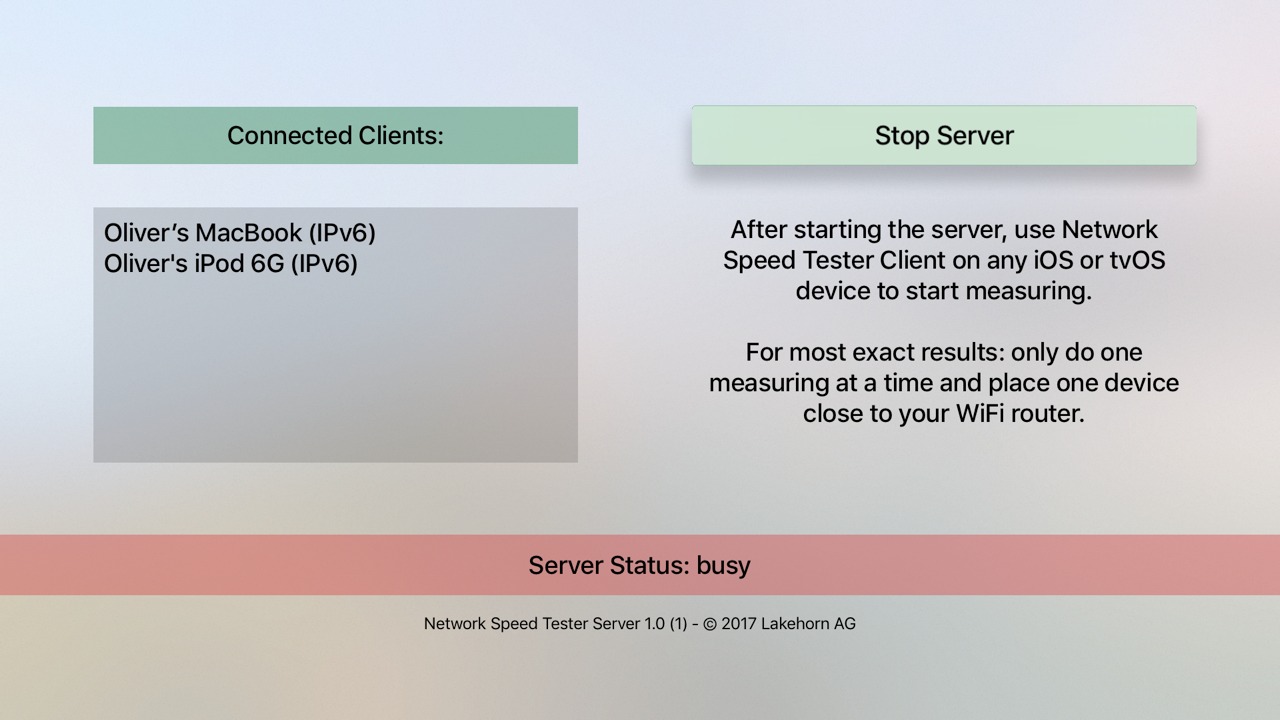 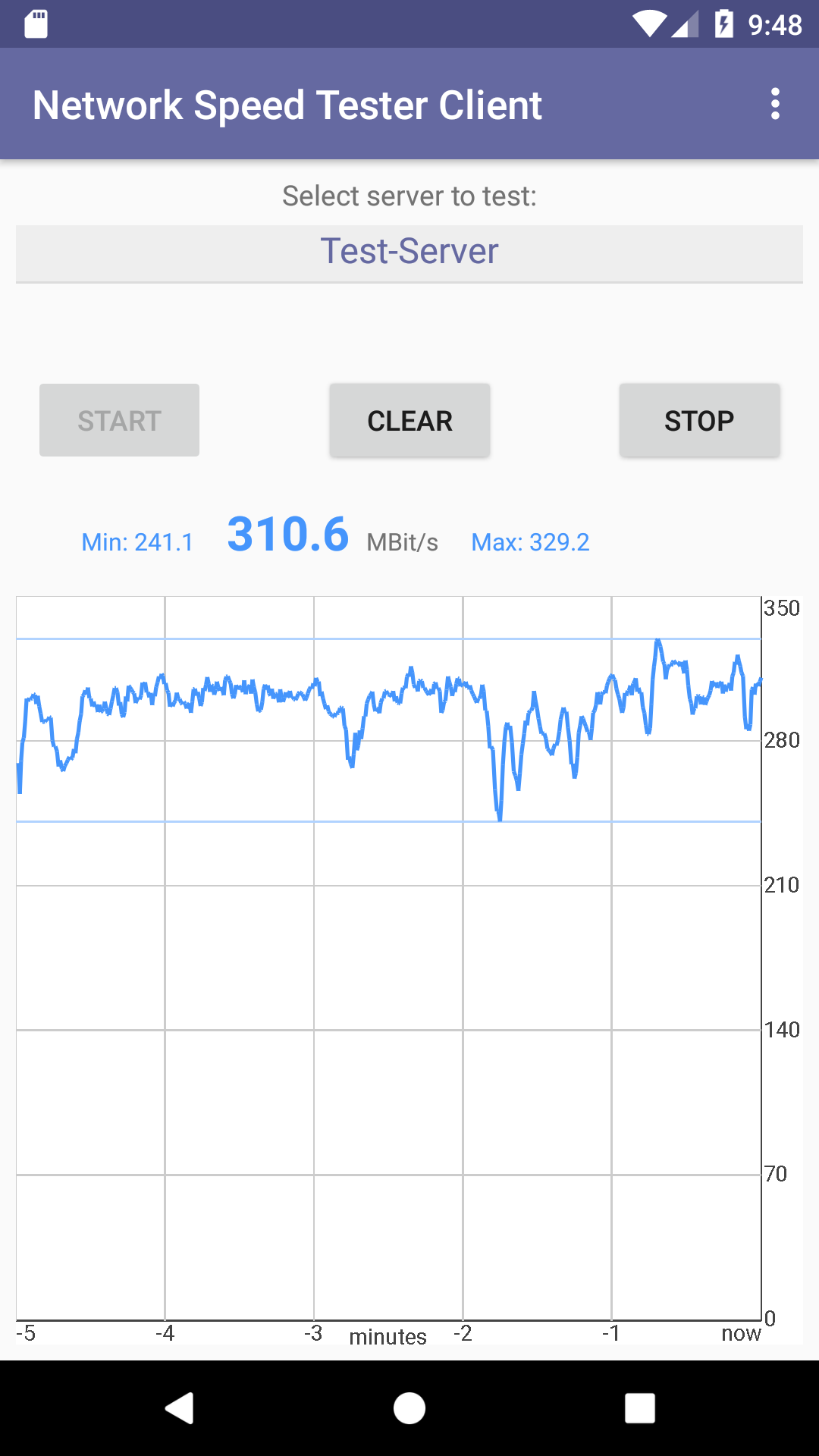 Why are the results for the default router so low? (Mac only)
When measuring against the default router, only very little data can be transferred to measure the network throughput. For fast network connections (e.g. wired connections) this results in very inaccurate measurements. For a WiFi network, it can still help to find a better spot for your device or router. Whenever possible, use two machines to do an exact measurement!

My results are way lower than expected / printed on box of router
It is normal, that the actual network performance on a WiFi network is way lower than advertised. The pratical performance is probably 50-60% of the advertised one. Even then, you need to stand in front of your WiFi router to get to the maximum data rate. You can experiment with the placement of your device and router to improve the data rate. Sometimes all it takes is moving your router 10cm or rotating it 90 degrees.

What network port is used for the measuring?
Network Speed Tester uses a TCP connection over port 4138 to measure the performance. If you measure via firewall/NAT, make sure this port gets passed through.

Connections are dropped
When you have multiple WiFi routers, or routers with more than one frequency band, the test can stop, when a router/frequency change occurs. Just start the test again.

The server doesn’t show up even though it is running
Servers are found via Apple’s Bonjour technique. This usually only works on local networks, not when there is a router in between. In these cases, note the address of the server (found in status on the bottom of the window) and add this address manually on the client you are testing from.

What is my current WiFi connection speed?
On the Mac, Option-Click on the Wifi menu. The current used speed is display at “Tx Rate”. iOS/tvOS devices don’t provide this information.

Are there other supported platforms?
The server and client are available for all Apple devices: macOS, iOS (iPhone/iPad/iPod touch) and tvOS (Apple TV 4). For the Android platform, a free client is also available.

Can I test external servers or my internet connection?
This tool focuses on point-to-point testing within a wired or WiFi network. For internet speed tests, you can use a service like fast.com.