When the app starts for the first time, default groups and a close-by airport will be shown. The list  allows groups and station be to mixed in the same view. Stations can be added through the + button and deleted or moved via the edit button. Swiping a station to the left will also delete it.

However, groups are managed by taping on three-dot button. For each group the available options depend group. Groups in the main view can be hidden or shown. In fact, all groups can be hidden so only station will be shown. 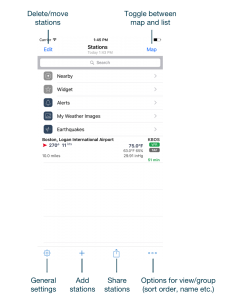 Data will usually be loaded automatically, however, by pulling down the list data can be reloaded manually at any time.

A predefined tag can be attached to any airport by swiping to the right. A “flag” button will show the options:

The other button with the speaker icon will read out the METAR similar to an ATIS.

Many settings can be changed right within the view they will be applied to (three-dot button). In the general settings (accessible thru cog-wheel button) are the preferences which usually don’t have to be changed often. First look at the Unit and Format sections. 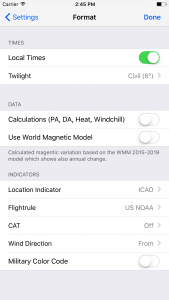 The METAR cell is interpreted as follows:

The flightrule condition icon indicates the current visibility and cloud ceiling either by ICAO or NOAA definition:

On the iPhone tap on the ooo-button (bottom right) when in main list. Then make sure the Apple Watch groups is checked (you can uncheck it again after to set the station). Go back to the main list and then into the Watch group and add some stations.

In the Watch app you can choose between iPhone list and nearby mode by applying a “long press” on the display. When chosing iPhone list all stations defined in the above mentioned Watch group will be shown. Nearby will first acquire the current position and display close-by stations. Besides the two modes there’s also a refresh button to do a data refresh manually

There are many possibilities to customize complication display (depending on the complication type). There are indicators for present weather, wind, ceiling and visibility.

Use the Watch app on your iPhone to customize the thresholds for the wind, ceiling and visibility indicators. Whenever a limit is reached it’ll be displayed by a letter code:

There is also an option to show present weather as 2-letter METAR code or symbol (e.g., ❄️ or SN). 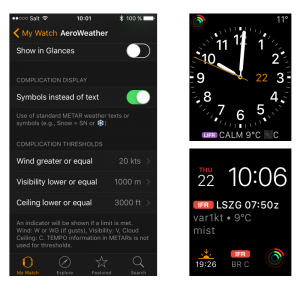 Internet access is required to view, create, and edit alerts.

AeroWeather (2.0 or higher) automatically creates a snapshot of all user data before the app is updated to new version. Snapshots can be imported like any other AeroWeather file (with .aw2 file extension). If iCloud Drive is enabled on a device, snapshots are also saved in a folder named “AeroWeather” and can be accessed on any Mac. Snapshots are stored for each device separately. Snapshots are very small and occupy often just a few KB.

To restore a snapshot either import it through Dropbox or simply mail the .aw2 file to yourself and then import by taping (usually a long tap and then select AeroWeather Pro as handling app) on the attachment in the mail app of your device.

AeroWeather (2.0 or higher) now offers a new possibility to exchange data from and to the app. It allows to exchange groups, stations, and notes. Data is formatted in JSON and stored in files with .aw2 extension.

Please download and consult the AeroWeather Exchange Format specifications (pdf). Let us know if your app handles import/export of AeroWeather data so we can start listing them.

You can use the URL scheme (aeroweather:// or aeroweather-lite://) to launch the app and display a station or even create a new group.

To display a station based on ICAO or IATA identifier in Lite resp. Pro version:

In the Pro version you can even create new groups or overwrite existing groups with stations. JSON is used as to specify a group and should look like this:

In “applicationID” use typically a unique name of app (e.g., app bundle ID) . This field is mandatory and never shown to the user.  The field “applicationName” is optional and may be presented to the user for information.

Use “previousGroups” to determine what to do with previously created groups. If it is set to “replace”, an existing group with the same name will be replaced with the new set of locations. If it is set to “delete”, all previously created groups with “applicationID” will be deleted. Omit “previousGroups” to create groups no matter of existing ones.  Multiple groups can be defined: the “groupName” is the name which will appear in the group list. List either IATA or ICAO identifiers in “locations” you wish to add in the new group. IATA or ICAO identifiers can be mixed.

The full URL for the example above would look like:

Here is sample code in Swift to generate createGroups URL:

We use cookies to ensure that we give you the best experience on our website. If you continue to use this site we will assume that you are happy with it.OkRead more